Since 1950, the Iowa State University Land Value Survey has been the only data source that provides a county-level land value estimate for each of the 99 counties in Iowa. The 2022 Iowa State University Land Value Survey reported a 17.0% increase to $11,411 per acre for average Iowa farmland values from November 2021 to November 2022. This continues the dramatic surge from last year and the $11,411/acre nominal land value is the highest-ever since data collection began in the 1940s. The 2022 nominal land value is 31% higher than the 2013 peak in nominal land values and the inflation-adjusted values, $9,088/acre in 2015 dollars, saw another 9% increase, topping the previous peaks of 2012 and 2013 inflation-adjusted values. The surge continues to be supported by high commodity prices, limited land supply, stronger-than-expected crop yields, a good farm economy, and ample cash reserves on the farm. All crop reporting districts reported an increase in land values with the Northwest and Southwest districts reporting growth of 20% or more. High-quality land saw a 16.8% increase, while medium- and low-quality land increased 17.7% and 15.2%, respectively. In general, the results from the 2022 Iowa State University Land Value Survey extend the trend of substantially higher farmland values.

The 2022 state average for all quality of land was estimated to be $11,411 per acre as of November 1, 2022. The statewide average value increased $1,660 per acre from November 2021. The statewide average value increased 17.0% from November 2021. The highest average land values were reported in Northwest Iowa, $14,878 per acre. The lowest average land values were reported in South Central Iowa, $6,824 per acre. Land values across all nine crop reporting districts saw an increase. The largest percentage increases were in the Northwest and Southwest districts, 22.3% and 22.2%, respectively. The South Central and Southeast districts, which saw the smallest percentage changes, reported increases of 13.1% and 9.8%, respectively

This year’s survey asked respondents to predict land values and cash crop prices one and five years from now, as well as the prevailing interest rates for a 20-year farmland mortgage and a one-year operating loan. Respondents had optimistic views regarding the strength of the farmland market one and five years from now, and generally expect stable or even higher land values. Forty-eight percent of respondents forecasted an increase in their local land market in one year, while 28% expected a lower land value and 24% forecasted no change. While the most popular response was for the one-year land price forecast to be the same as the current situation, the second-most popular answer was an increase of 5%–10%. Looking five years ahead, 24% of respondents forecasted a decline, slightly smaller than the 28% forecasting a decline 12 months from now. However, over 60% of respondents expect a further increase in land values, with an increase of 10%–20% selected by most respondents. This year’s survey added a question to better gauge the respondents’ views of current farmland values by asking them to rate the current farmland values in their primary county as way too low, too low, just right, too high, or way too high. Fifty-nine percent and 12% of respondents think the current land values are too high or way too high, respectively, while only 5% of respondents think the current land values are too low. Twenty-four percent of respondents think the land values are just right. Respondents expect stable corn and soybean cash crop markets. In particular, the predicted state average cash corn prices for November 2023 and 2027 (five years from now) are $6.09/bu. and $5.90/bu., respectively. The statewide average soybean price predictions are $13.12/bu. in one year and $12.84/bu. five years from now. Respondents reported typical interest rates for 20-year farmland mortgages and one-year operating loans are 6.65% and 6.98%, respectively. These are significantly higher than one-year-ago levels due to the multiple interest rate hikes by the Federal Reserve to combat inflation.

Outlook for Land Values in 2023 and Beyond 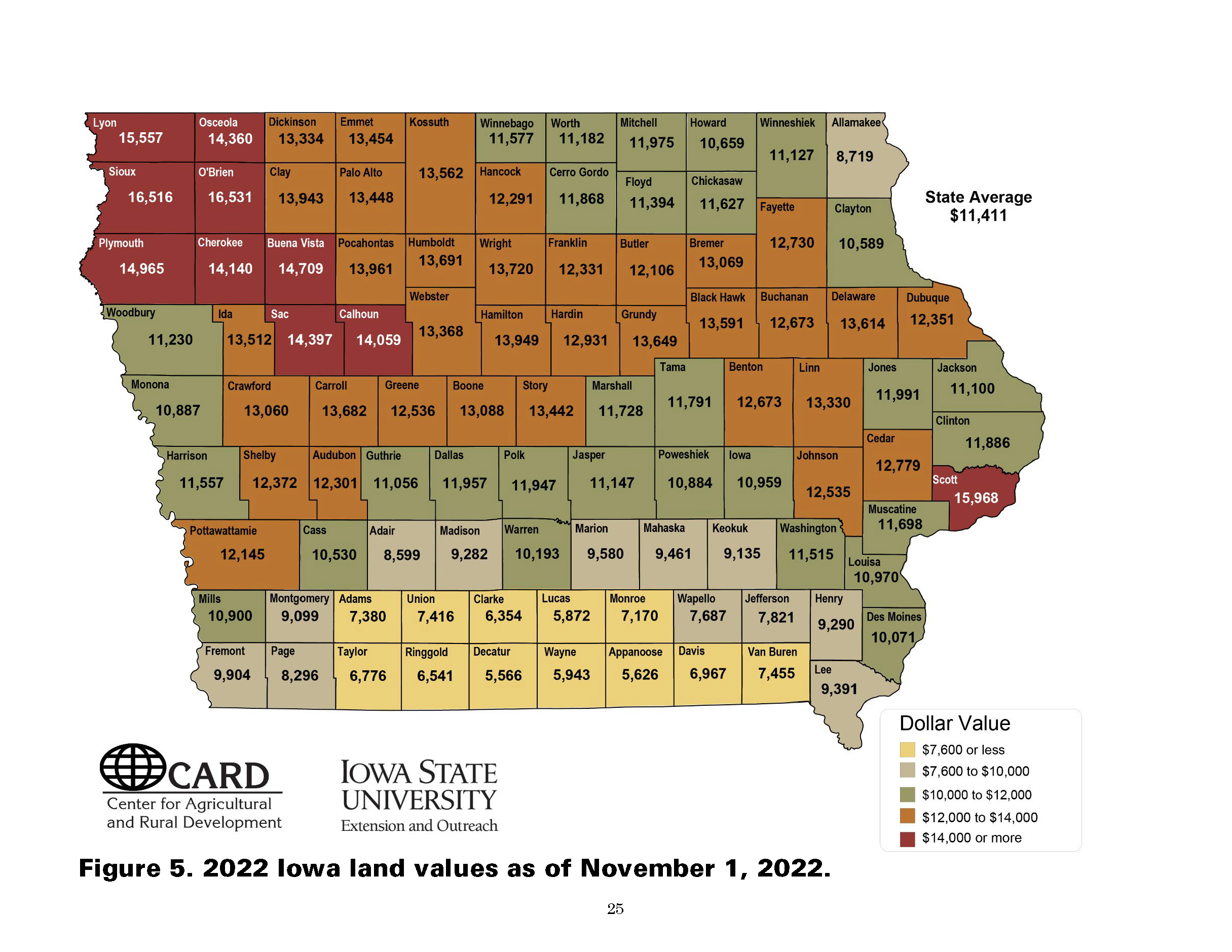 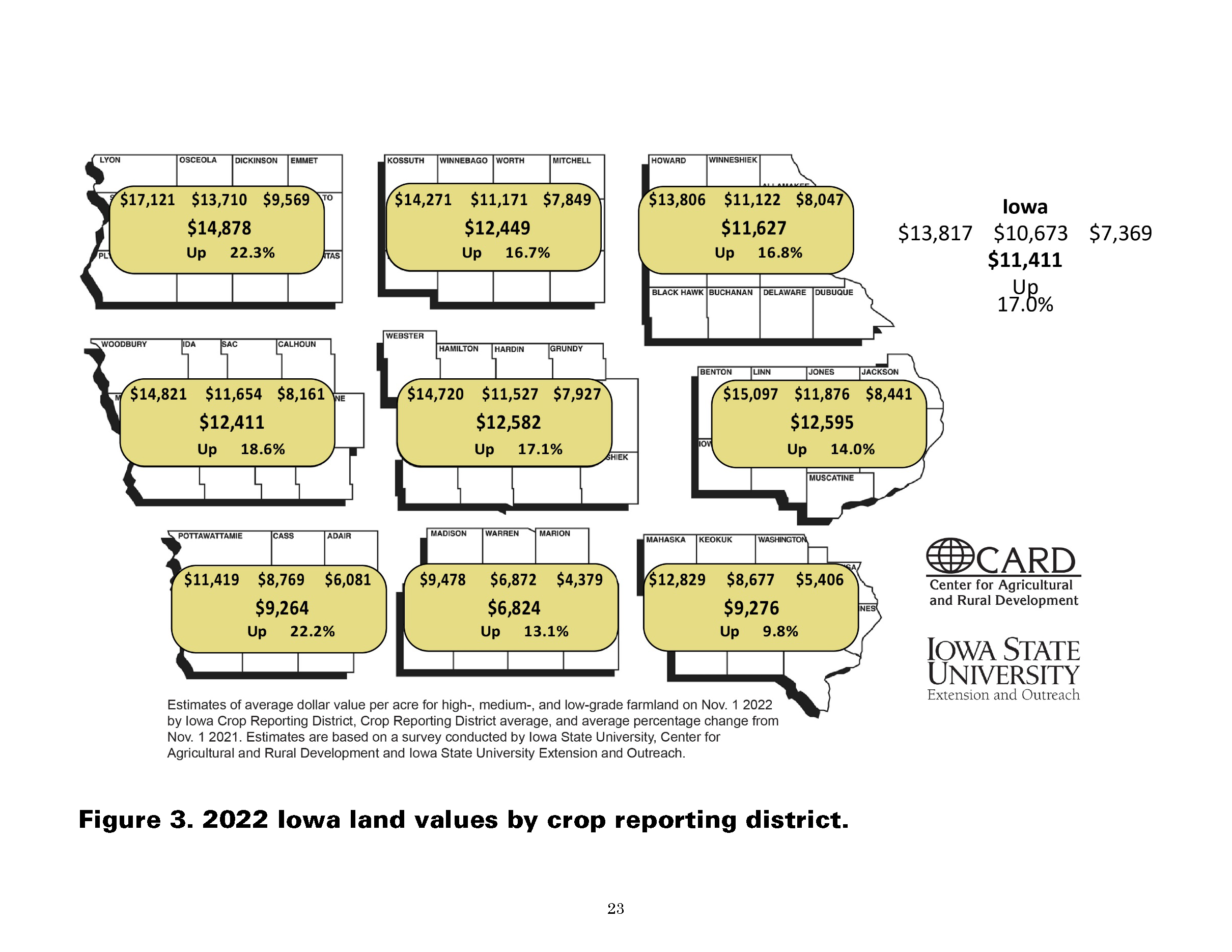 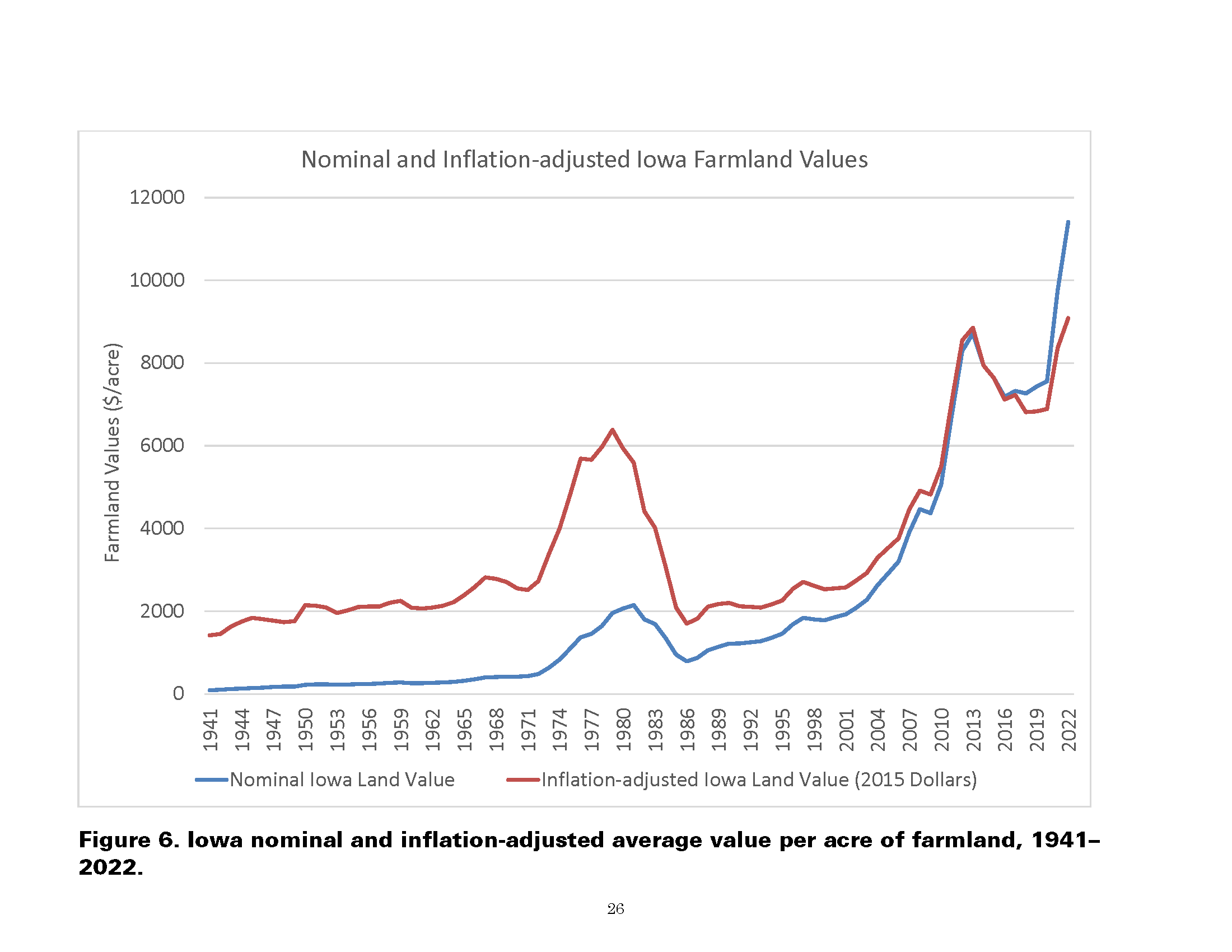 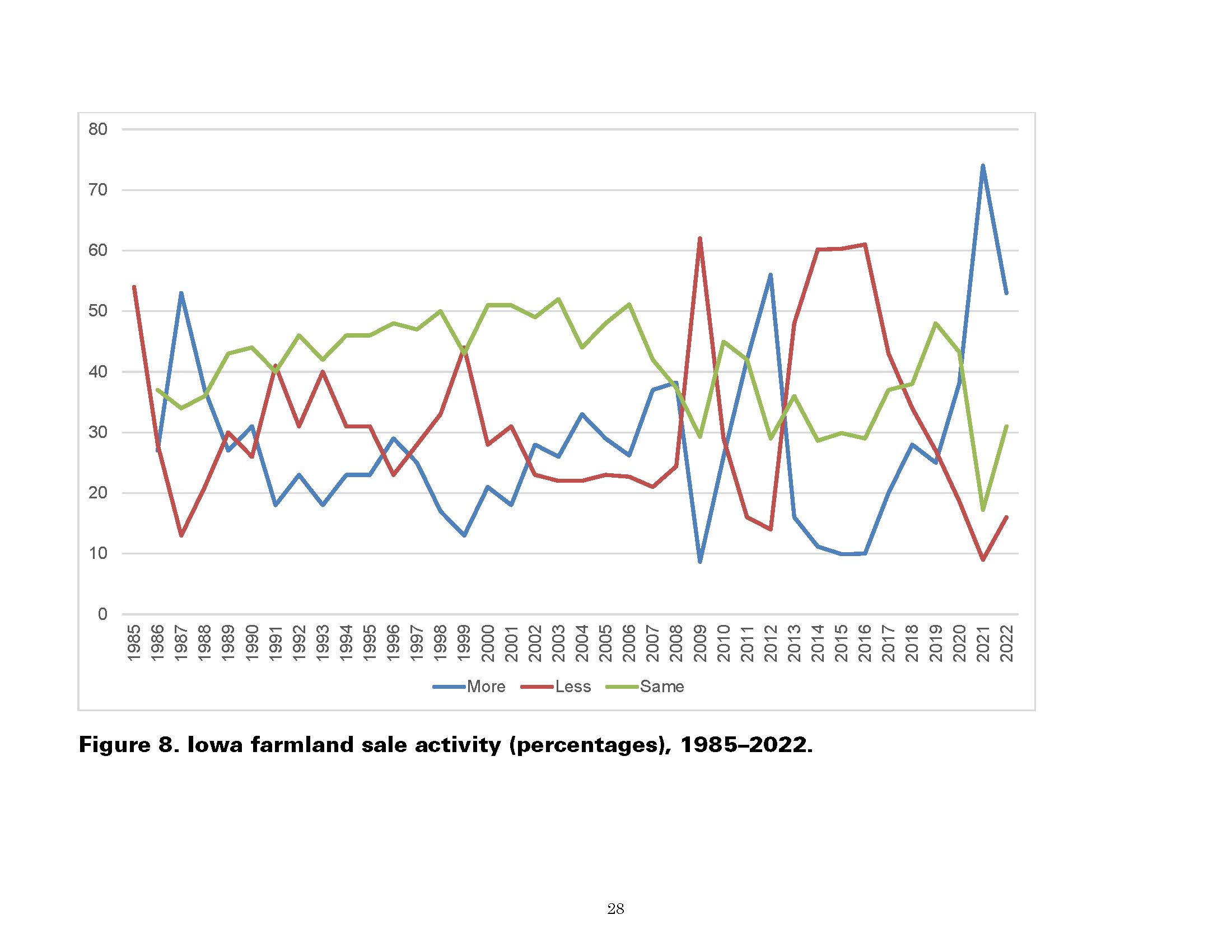 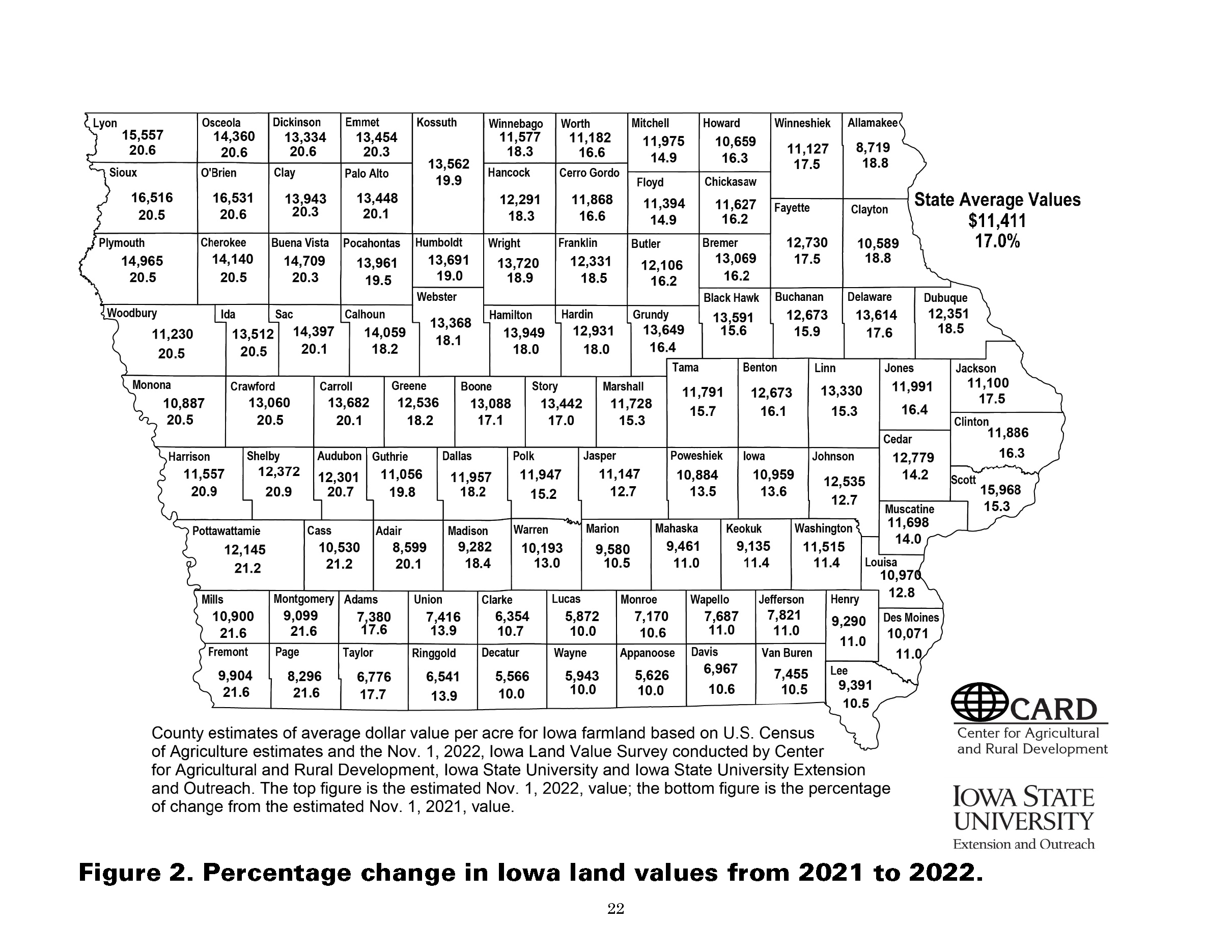